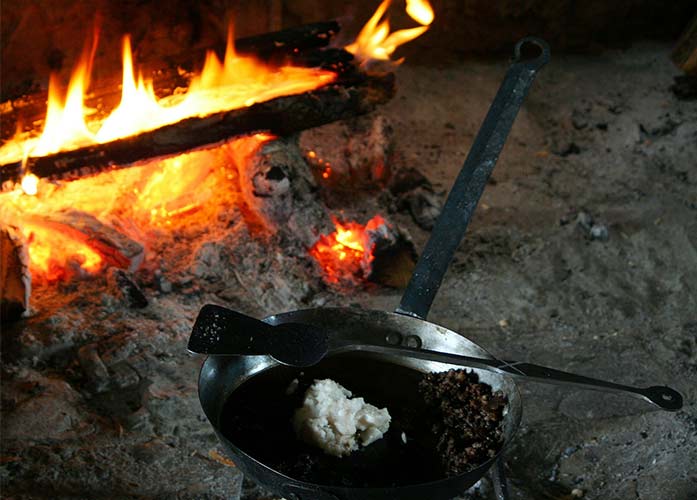 But first, let’s know- Can you use a cast iron over a fire?

Can you use a cast-iron skillet over a fire?

Yes, a cast iron skillet can be used over a fire. Cast iron skillet is an incredibly versatile and indestructible material. It is also one of the common cookware products used by hikers during their camping trips.

It is used, because outdoors there is not a proper source of fire, or sometimes your burner disappoints you. But with a cast iron skillet in your hand, you can use it to cook your food over a fire.

The main advantage of using a cast iron skillet over a fire is that its high volumetric heat capacity, meaning it stays hot for a long duration. This one’s in handy when cooking over a fire, as even the fire blows out, the pan will still be hot for a long time and enough for you to cook your food.

How to use a cast iron skillet over a fire

Firstly, before you begin packing your things for your outdoor camping, you must get yourself a good branded cast iron skillet.

The most popular cast iron skillet used by hikers for their camping trips is Lodge 10.25 Inch Cast Iron Skillet.

Check out on Amazon

The lodge is in the industry of making cookware since 1896, and after 100 + years, there is no other cookware product that comes close to this brand.

Step 2 – Check your cast iron skillet is seasoned or not

The new cast iron skillet often comes pre-seasoned. It comes in handy, as you don’t have to spend time to season it.

But if you are using an old skillet then, you have to season it. Seasoning a skillet meaning, you are creating a non-stick, smooth surface on your cast iron cookware. This thin layer avoids the food to stuck on the surface of the pan.

How to season a cast iron pan

Good oils to use for seasoning cast iron pans

Before you begin, using a cast iron skillet for cooking, you must start with prepping the fire. For optimal results, the best option is to start the fire in 15-20 minutes. For cooking over a fire, you have two options to cook over a fire, whether it is best to cook over hot coals or flames of the fire.

Both methods are good for cooking, but there is a slight difference.

On the other hand, if you use a cast iron skillet over hot coals, the temperature will be consistent for long hours, and it is easy to work with. Also, there are no roaring flames that could easily burn you if you accidentally touch it.

So, when you are cooking with a cast iron skillet over a fire, the first step is to establish a fire. A pre-established fire creates a more consistent temperature, that makes it easier to cook with. Also, you have to preheat the cast iron skillet before cooking, which takes about 15-20 minutes.

Unlike other pans out there, which evenly distribute the heat on the pan. The cast iron skillet is different.

If you have used an aluminum pan, you might have noticed that it has great thermal conductivity – the ability to transfer heat on all surfaces. However, cast iron only has a third to a quarter in comparison to aluminum. This, a cat iron skilled doesn’t heat evenly.

For cooking delicious food, you must use a pan surface, that not only cook the food in contact with metal but also the portion of the food ( It is good to cook meat, as the meat will be cooked from inside out).

This is possible due to the high emissivity( tendency to expel the heat from the surface). In comparison to stainless steel, a cat iron far exceeds emissivity. Stainless steel is around ( 0.07) while cast iron is around (0.64). So, in the future when you want to cook meat, the best choice is to cook it in one cast iron skillet. This way you can easily cook the meat from every corner.

After preheating, the iron skillet can stay hot for few hours, and also in cooking food even if there is no fire.

Step 6- Cook over a campfire or fire

On a camping trip, you are going to cook food from meat to vegetables. For cooking vegetables, the first step is to:

Squirt a little oil into the pan before you start cooking. Also, you can put oil on vegetables. This doesn’t affect your cooking, and the food will still be delicious.

The benefit of this is in cleaning. The thin layer of oil is easier to clean as it creates a non-sticky layer.

It’s hard to say no when you are in a deep mountain on your camping trip, and there are eggs on the table. Cast iron skillets are most popular for cooking meat and eggs. If you run out of fire, you can still cook another omelet without any worry. If you cook with an aluminum pan for cooking eggs, you always end with small pieces of eggs sticking on the surface.

Sometimes, the eggs are half cooked: the bottom part is burned whole the upper part is uncooked. This can be avoided by using a cast iron skillet, as your eggs will not be sticking to the pan.

Cast iron is most popular for cooking meat, unlike stainless steel pans, the cast iron skillet cooks every inch of the meat.

Pro Tip: don’t flip steak constantly. Firstly, fully cook one side and then flip it. Continued flipping results in uncooked meat and most of the time it sticks on the pan.

After cooking a delicious meal on the cast iron skillet, it’s time to start cleaning it. The process is simple and you’ll only need a few minutes for proper cleaning.

Note: Before starting cleaning a cast iron skillet, make sure you don’t dip it in cold water. The instant temperature change can lead to small cracks on the iron skillet.

You may like- What to Eat Before a Hike ?

Use Soap Or Not

For cleaning the skillet, salt and hot water are the perfect combinations. The salt removes the food stuck on the surface, without damaging the seasoning of the cast iron skillet.

It’s a common myth that you should use soap for cleaning a cast iron skillet, as it will ruin the seasoning. But If the salt and hot combination don’t work efficiently, you can use soap.

Although, if the food is stuck on the surface and the salt and water combination doesn’t work, that means the cast iron skillet is not properly seasoned. So, to get rid of the food, soap is okay, as you have to season it again, so it doesn’t make a difference if you use soap or not.

Best utensils for cooking over fire with cast iron skillet

Cooking over a fire is dangerous, as you get in contact with a roaring fire, you can get a burn. Although, a cast iron skillet is safe to use, but you still take precautions while cooking over a fire.

Utensils that are must required with cast iron skillet is a Spatulas. With that, you can easily cook food without getting near a fire.

Although, spatulas come in three types; wood, stainless steel, and plastic. Wood and stainless steel can be used while cooking in a cast iron skillet over a fire.

But plastic Spatulas should always be avoided, as plastic could melt easily due to the high temperature of the iron skillet.